Our thanks to Detroit Catholic and the Archdiocese of Detroit for running an article about the apostolate!
Gabriella Patti, “Traveling Exhibit of Eucharistic Miracles Bolsters Catholics’ Faith in Real Presence,” Detroit Catholic, April 13, 2022 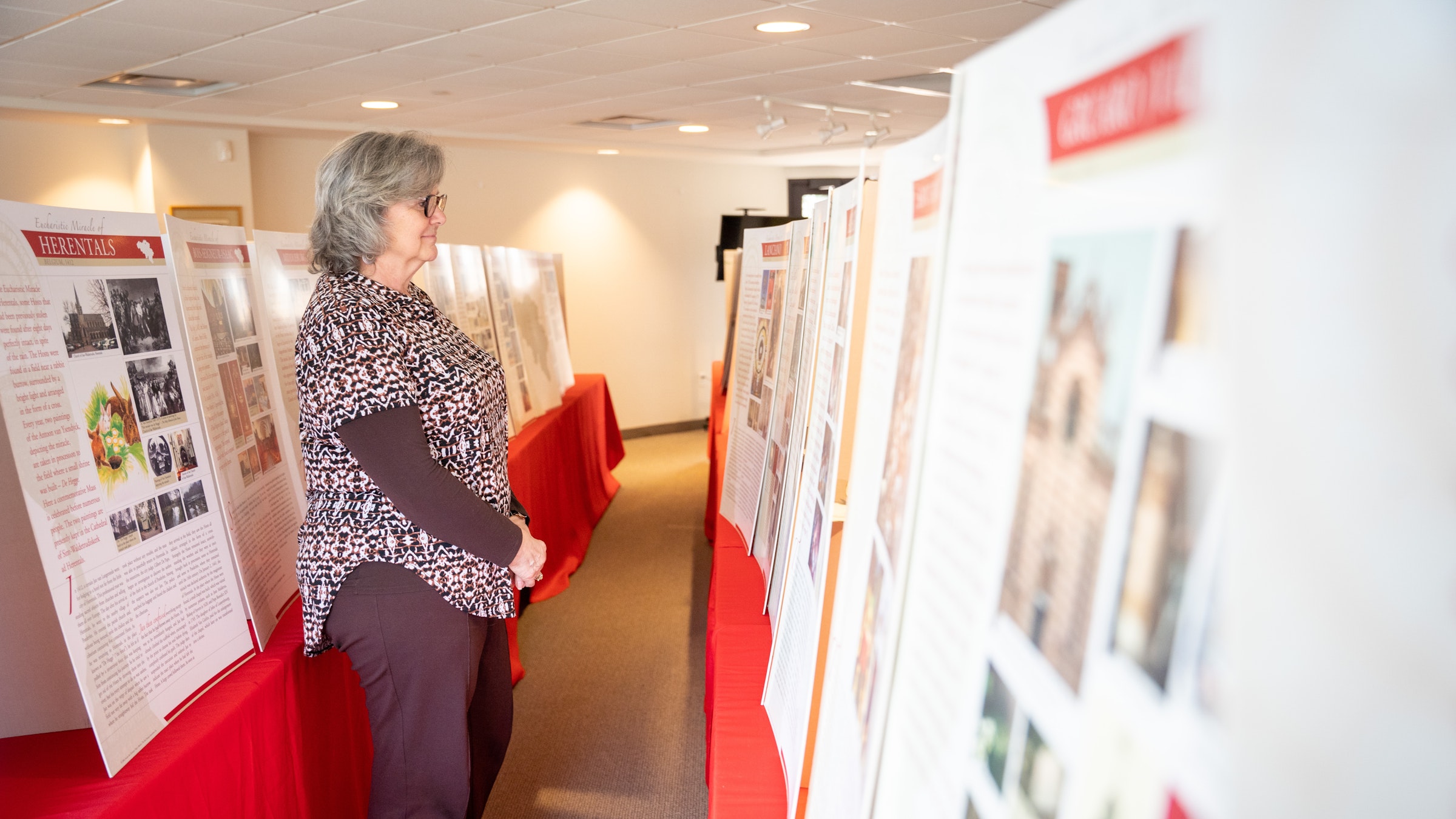 A woman reads a poster describing a Eucharistic miracle at St. Roch Parish in Flat Rock on April 11 as the parish hosted the Real Presence Apostolate of Michigan’s traveling exhibit on Eucharistic miracles, instances in the Church’s history when Jesus’ body and blood in the Eucharist became physically and really present. The exhibit comes as faith in the Real Presence among U.S. Catholics has declined dramatically in recent years, according to Pew Research polls. (Photos by Valaurian Waller | Detroit Catholic)

Amid declining belief in the Blessed Sacrament, Michigan apostolate aims to remind Catholics that Jesus is powerfully — and really — here

FLAT ROCK — In the year 1300, a priest was celebrating Mass in the convent of O’Cebreiro, Spain. Lacking faith in the true presence of Jesus in the sacrament, the priest nevertheless recited the consecration prayers.

Suddenly, the host he held in his hand turned into real human flesh. Turning to the cup, the priest, incredulous, noticed not wine, but actual human blood. He fell in adoration.

The incident, recognized by Pope Innocent VIII as the “Miracle of O’Cebreiro,” is one of hundreds of Eucharistic miracles in the Church’s history — incidents in which the supernatural reality of Jesus’ body and blood in the Eucharist became powerfully and physically apparent.

The Eucharist is the “source and summit” of the Catholic faith, but according to a 2019 Pew Research Center study, today, only one-third of Catholics believe in the Real Presence of Jesus in the most holy sacrament.

In response to this waning belief, the U.S. Conference of Catholic Bishops is launching a three-year National Eucharistic Revival beginning this June, in order to see “a movement of Catholics across the United States, healed, converted, formed, and unified by an encounter with Jesus in the Eucharist — and sent out in mission ‘for the life of the world.’” 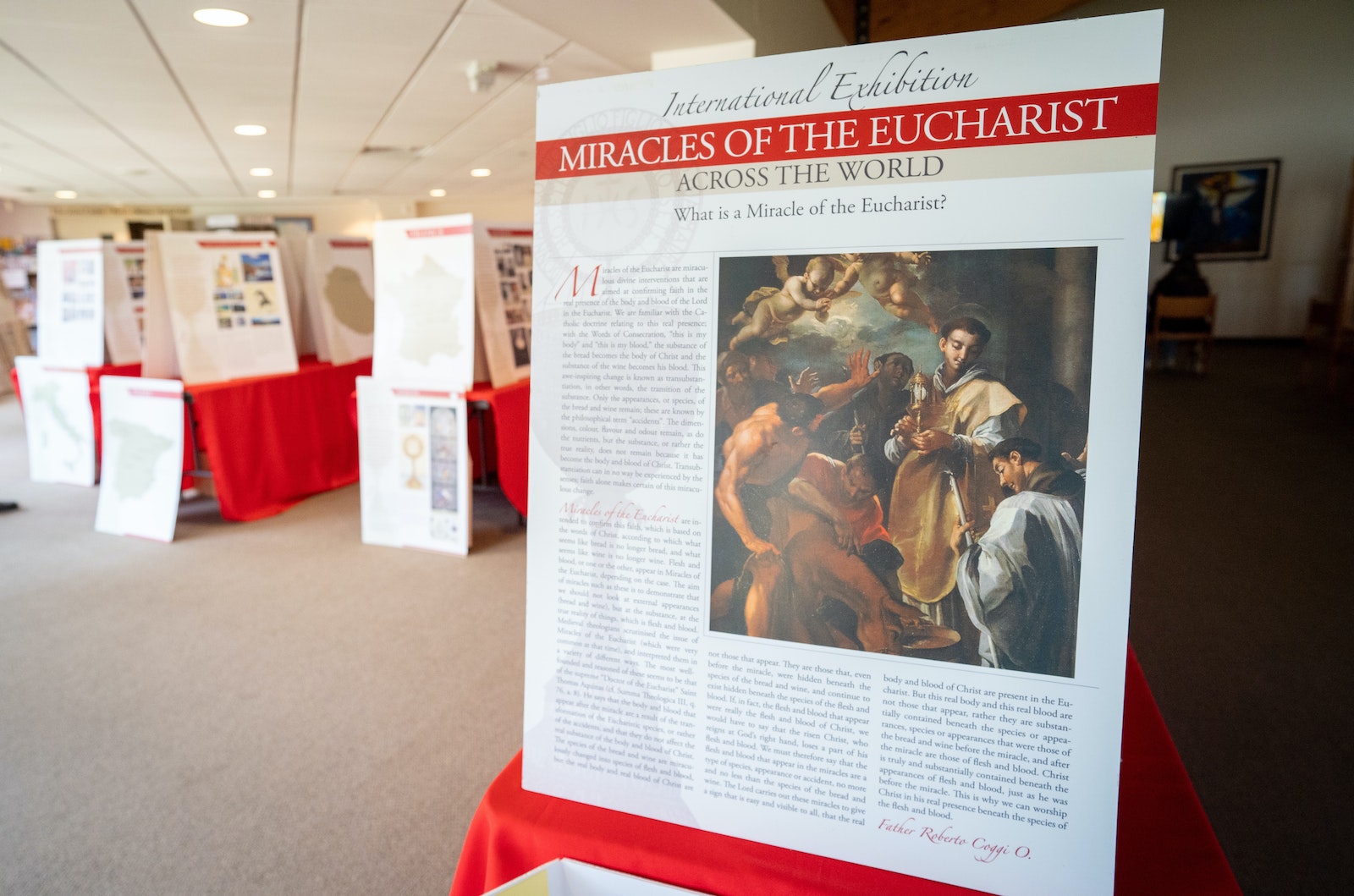 A traveling exhibit of Eucharistic miracles, pictured on display at St. Roch Parish in Flat Rock, includes 170 descriptive panels featuring more than 140 Eucharistic miracles from the Church’s history. Any parish can request the exhibit, said Margy Nagel, co-founder of the Real Presence Apostolate of Michigan.

Meanwhile, a small apostolate in Michigan has been educating Catholics on the True Presence since 2007 by offering a traveling exhibit about Eucharistic miracles — instances in which the literal presence of Jesus’ body and blood in the Eucharist have become physically manifest.

The exhibit is available to any parish or organization that would like to host it.

Several Downriver parishes in the Archdiocese of Detroit have hosted the exhibit in recent weeks, including St. Roch in Flat Rock, Christ the Good Shepard in Lincoln Park, Our Lady of the Woods in Woodhaven, Sacred Heart in Grosse Ile, St. Vincent Pallotti in Wyandotte and St. Andre Bessette in Ecorse. Our Lady of the Angels Parish in Taylor will host the exhibit April 22-29 before it travels to Grand Rapids.

The extensive collection of 170 panels features historical documents and photos of 140 different Eucharistic miracles from all over the world.

For Margy Nagel, who co-founded the Real Presence Apostolate of Michigan along with several others, promoting the Real Presence is crucial to bolstering faith in the saving power of Jesus. Each year, the apostolate hosts a conference at Our Lady of Good Counsel Parish in Plymouth during the feast of Corpus Christi, Nagel said. This year’s conference will take place June 18, with Dr. Bryan Thatcher, founder of the Eucharistic Apostles of the Divine Mercy, as keynote speaker. 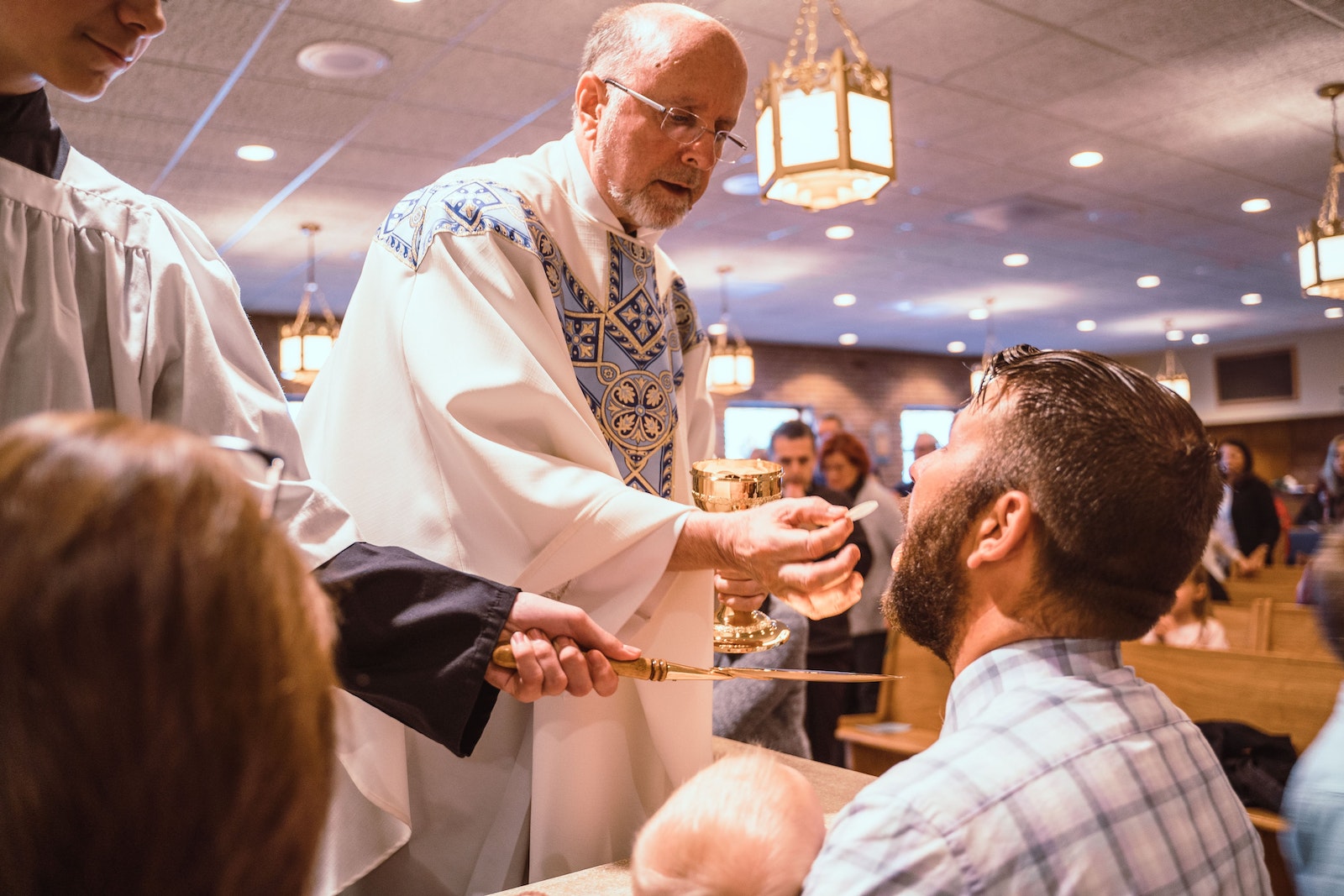 Fr. John Hedges offers Communion to a man at the Our Lady of Fatima Shrine in Riverview in this file photo. The U.S. Conference of Catholic Bishops will sponsor a three-year Eucharistic Revival starting this summer, an effort to bolster Catholics’ faith in the Real Presence of Jesus in the Eucharist.

Nagel, a parishioner at St. Joan of Arc in St. Clair Shores, said the idea for the apostolate came about in 2007 after she learned of the Real Presence Eucharistic Education and Adoration Association, which was founded by Servant of God Fr. John Hardon and based in Chicago.

Soon after Nagel inquired about how to bring the exhibit to Michigan, another couple, Sarah and Mark Zydeck, parishioners at Our Lady of Good Counsel, along with a friend, Emmanuel Ssemakula, had also reached out to the association in Chicago, interested in bringing the exhibit to their own parish. The association put them in touch with Nagel, and the Real Presence Apostolate of Michigan was born.

Nagel said the exhibit itself was created by Blessed Carlo Acutis, an Italian teenager who documented Eucharistic miracles on his website before dying of leukemia in 2006 at the age of 15.

An anonymous donor gave the Michigan group the ability to print the 170 panels, which have since been on display in all seven of the state’s Catholic cathedrals and more than 400 parishes. Because there are so many, parishes can choose whether to display all the panels or just some.

“Every parish uses their own creativity,” Nagel said. “One parish created life-size Swiss guards for the entrance of the exhibit. Some parishes bring in speakers. Some have 40 hours’ devotions. Some parishes organize and give tours. Every parish does its own planning, and we are always thrilled and delighted to hear what each parish has done.”

At St. Roch Parish in Flat Rock, all 170 panels were on display in the vestibule at the start of Holy Week, where parishioners can explore the exhibit before or after Mass. 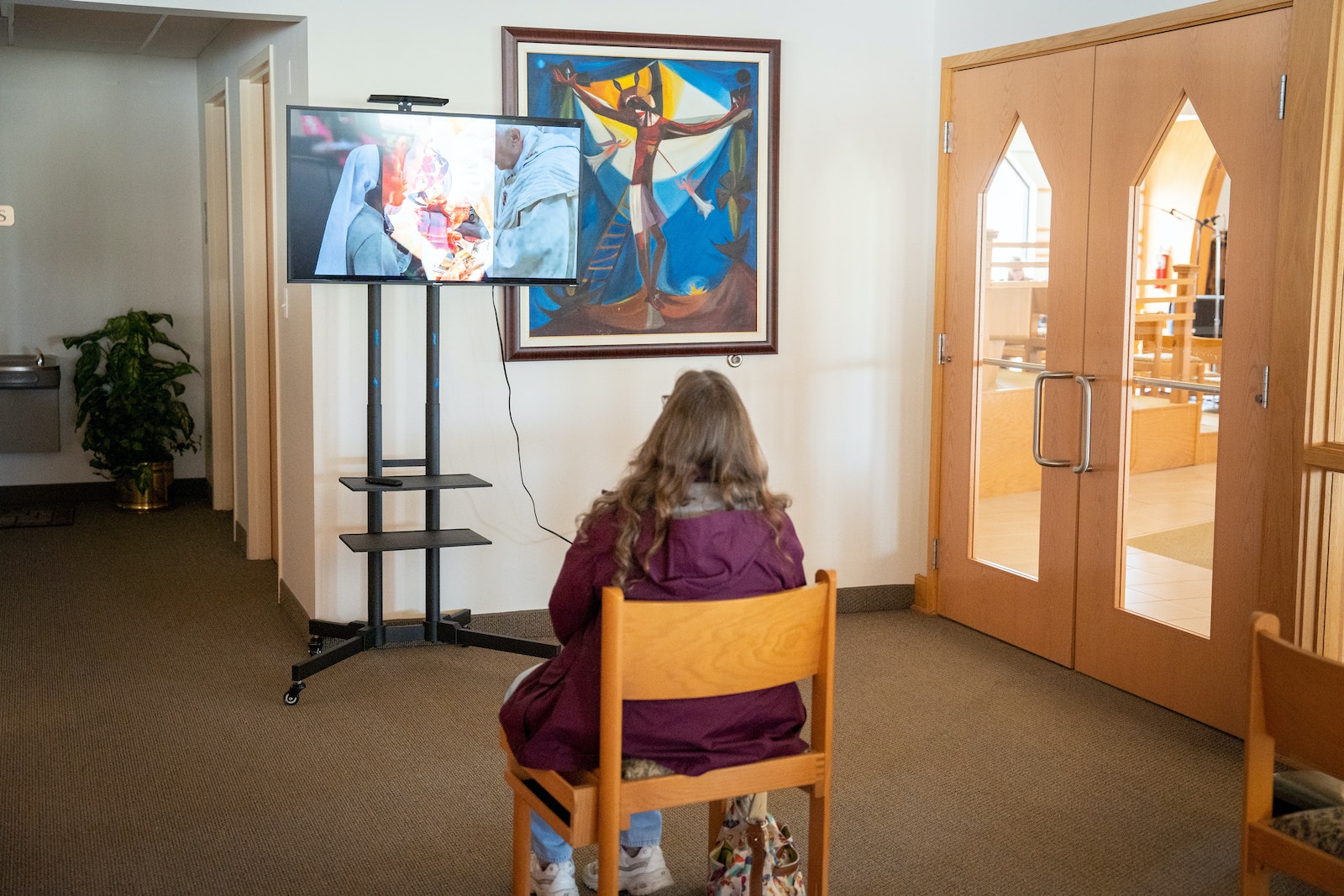 Fr. Ray Lewandowski, a priest in solidum who ministers at St. Roch, said the parish has been offering a Lenten program focused on the spirituality of the Eucharist in addition to the Eucharistic miracles exhibit.

Fr. Lewandowski hopes the exhibit and teaching materials will help Catholics make a connection to the Church’s teaching, and to better understand and appreciate the gift of the Eucharist in Catholic life.

“Hopefully, (non-Catholics) may recognize that we are unique or different and say, ‘There is something different about you,’ and then you can say, ‘I’m a Catholic Christian,’” Fr. Lewandowski said. “And then you can talk about what (you) receive, what (you) celebrate, and how the Communion (you) celebrate has an influence upon (you), an effect, and that is demonstrated by everyday living.”

“The Eucharist has always been in our Church, but I think a lot of people have a tendency to get stuck on autopilot,” Fr. Bechill said. “To see the historical miracles that have been approved by the Church (reminds us) that when we go to Mass, we are joining heaven; it is a foretaste of who we hope to be in heaven.”

To request a visit from the Eucharistic miracles exhibit hosted by the Real Presence of Apostolate of Michigan, visit rpamichigan.org or email rpa@rpamichigan.org.